"...there be some that trouble you, and would pervert the gospel of Christ." -Galatians 1:7

The Pentecostal teaching that a believer can LOSE salvation has been a cause for great concern by believers for a long time.  From my own experience, I have found that the average Christian isn't sure what to think about the Pentecostals (i.e., the Charismatic Movement).  Are they saved or not?  If you speak to most Charismatics, they'll give every impression that they're true Christians.  Many are aggressive witnesses for their religion.  Yet something is VERY wrong with their doctrine ... VERY WRONG!  The Jehovah's Witnesses are as aggressive as any religion in propagating their doctrines; yet they serve Satan by spreading devilish doctrines.  Just because Pentecostals are aggressive to spread their doctrines doesn't mean that they're of God.  Charismatics PERVERT the Gospel of Jesus Christ by ADDING holy living as a requirement to keep one's salvation.  This is utter self-righteousness, and a lack of faith in God.

Tom Brown is a Charismatic pastor in El Paso, Texas.  Here, in his own words, in his bizarre conversion experience ...

I was baptized in the Holy Spirit at the First Assembly of God church on Montana. The preacher asked for those wishing to dedicate themselves to the ministry to come forward for prayer. The first to come forward was a tall, slender fellow name Timmy. I thought, "If Timmy can go forward, I can too." So I followed him down to the front of the podium.  Without notice, something invisible hit Timmy, and down he went on the floor. Almost immediately, something hit me too. Down I went, prostrate on the ground. I began to weep uncontrollably. God's presence was all over me. This went on for several minutes.  The thought occurred to me, "This must be what my church has been talking about all these years. What is happening to me must be the baptism in the Holy Spirit." No sooner did I think that when I heard this scripture in my mind, "And they were all filled with the Holy Spirit and began to speak in other tongues."  If I'm filled with the Holy Spirit, then I'll speak in other tongues, I reasoned in my mind. Right then, I began speaking in other tongues--and I haven't stopped yet! -SOURCE (Speaking In Tongues by Tom Brown)

The Pentecostals are a sorry bunch I'll tell you.  Why don't they ever imitate the mighty rushing wind in Acts chapter 2, or the cloven tongues of fire?  Why do they only imitate speaking in tongues?  And by the way, and this might surprise you--no one spoke in tongues in Acts 2 at Pentecost!  That's right, NO ONE SPOKE IN TONGUES!  If you read the Word of God carefully, it says "every man heard them speak in his own language."  Peter was preaching to a crowd of thousands.  At least 16 different nations were present (Acts 2:9-11).  Each man heard the Gospel in his native tongue (language).  Here are a few important observations:

According to the official website of the Assemblies of God religion ... 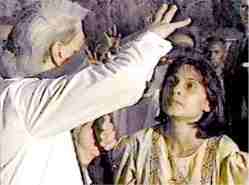 Charismatics: Talking Out of Both Sides of Their Mouth

The official website of the Assemblies of God Church states...

Further down on the same page they state...

"Without question, some believers who do not speak in tongues have accomplished great things for God."

How can this be?  How could the greatest soulwinning preachers throughout history have accomplished great things for God without being spirit-filled?  Zechariah 4:6 is clear, "...Not by might, nor by power, but by my spirit, saith the LORD of hosts."  The two statements made by the Assemblies of God above CONTRADICT each other.  In one statement they say "speaking in tongues is the unmistakable initial evidence of the baptism of the Holy Spirit"; but then they admit that great things have been done for God by believers who didn't speak in tongues.  That doesn't make any sense.  If speaking in tongues is "unmistakable evidence" of being Spirit-filled, then the mightiest preachers should have all spoken in tongues; But they DIDN'T.  Dwight L. Moody is responsible for the salvation of millions of lost sinners; yet he NEVER spoke in tongues even once.  Clearly, Charismatics are a wayward bunch.  Why is it that Charismatics are the ONLY ones practicing "dancing in the spirit" or "being slain in the spirit?"  Notice that I used a small "s" deliberately, because what Charismatics are practicing is demonic.  Pentecostals are the only religious group who require speaking in tongues as evidence of salvation.  Such teachings are not only heretical, but equally ridiculous as well.

It is extremely important for the Bible student to look up the word "tongues" in the Greek.  As you will find, "glossa" simply means "languages."  When the Bible speaks of "tongues," it ALWAYS is referring to a KNOWN, earthy, established language--never some mysterious, unknown, hocus-pocus, mumbo-jumbo.  The demonic tongues which the Pentecostals practice is NOT found anywhere in the Word of God.  Even the carnal Church of Corinth wasn't foolish enough to speak in some crazy language that even the speaker didn't understand.  This is clearly evidenced by Paul's constant mention of the necessity of an interpreter.  No one could interpret the garbage which Charismatics are babbling even if they tried.  They admit that they don't even know what they're saying.  How insane!  For an excellent understanding of the subject of tongues, please read Face to Face With Tongues (by Pastor Max D. Younce, Th.D.)

The True Biblical Evidence of Being Spirit-Filled

Every Charismatic/ Pentecostal needs to take a careful look at Acts 9:17-20, because it puts them all to shame...

"And Ananias went his way, and entered into the house; and putting his hands on him said, Brother Saul, the Lord, even Jesus, that appeared unto thee in the way as thou camest, hath sent me, that thou mightest receive thy sight, and be filled with the Holy Ghost.  And immediately there fell from his eyes as it had been scales: and he received sight forthwith, and arose, and was baptized.  And when he had received meat, he was strengthened. Then was Saul certain days with the disciples which were at Damascus.  And straightway he preached Christ in the synagogues, that he is the Son of God."

The first thing that Paul did after he got saved was SOULWINNING!  When Paul was filled with the Holy Ghost, he went SOULWINNING!  There is NO mention of tongues anywhere surrounding Paul's conversion experience.

What's Wrong with the Assemblies of God?