SLAYER Sings... “God Hates Us All”

Heavy Metal rock music is a culture of death, depravity and rebellion, represented often by the number 13. There are hundreds-of-millions of fans worldwide, whose bodies are adorned with satanic piercings, tattoos and jewelry. Upside down pentagrams are common.

A Pentagram with the point facing upward is used by Wiccan witches who attempt to conceal their Luciferian worship of the Beast.

The upside down pentagram represents open Satanism. Literally, Heavy Metal music is worship of Satan, which is why Dave Mustaine of MEGADETH and others refer to their albums as “offerings.” As hard as it is to imagine, these demonic Rock bands are offering up their fans in the audience to their lord, Satan. Though the music, the gods of Rock music recruit followers (fans) to worship their ultimate god, the Devil.

The Heavy Metal band, SLAYER produced an album in 2001 titled, “GOD HATES US ALL.” The first song on the album is
“DARKNESS OF CHRIST” ...

“Only in the darkness of Christ have I realized God Hates Us All”
SOURCE: (from SLAYER's album "GOD HATES US ALL," 2001)

This is the band that Dave Mustaine of MEGADETH says he still likes to open for in concert. Mustaine is a fraud and no Christian! Mustaine refuses to perform now with “confessed Satanists.” He says he doesn't mind performing with bands which “have a little darkness, because we all have some darkness in us.”

Below is the front of the 2001 SLAYER album cover of their work of darkness titled, GOD HATES US ALL...

This is so evil. Whereas the Bible teaches that God loves all mankind and sent His only begotten Son to die for our sins, the band SLAYER blasphemes God and propagates the lie that God hates everyone.

Here are some lyrics from SLAYER's blasphemous song “NEW FAITH,” which is an invitation for the Christian man of God to worship Satan instead. The lyrics say that Satan will give you a life of immoral pleasures like you never knew if you'll worship the Devil. Read what they sing for yourself... rejecting the Word of God as folklore and untruths...

SLAYER openly worships Satan in their music; such as in the song: "Warriors from the gates of hell . . .

"In lord Satan we trust."

Slayer's albums sell in the tens-of-millions! And song after song — ARE PRAISES TO SATAN! Their song "Hell Awaits" says:

"Jesus knows your soul cannot be saved
CRUCIFY THE SO CALLED LORD
He soon shall fall to me
Your souls are damned
Your God has fell to slave for me eternally
Hell awaits."

The beginning of their song "Hell Awaits" contains an obvious backwards message. When played forward, nothing but garbled noise is heard, but when played backwards — you hear the real message — "JOIN US, JOIN US, JOIN US" — over and over!

Does this music effect young people?
A Slayer fan writes in Spin magazine (May 1989):

"I hate your God, Jesus Christ. SATAN IS MY LORD. I sacrifice animals for him. My god is Slayer. Its THE WORDS of their music I BELIEVE IN."

The Rock group Manowar, sings in "The Bridge of Death":

"Dark Lord, I summon thee
Demanding the sacred right to burn in hell . . .
Take My lustful soul
Drink my blood as I drink yours . . .
LUCIFER IS KING
PRAISE SATAN!"

The group Morbid Angel, sings in "Vengeance in Mine":

"Mote it be
Satan's sword I have become . . .
I burn with hate
TO RID THE WORLD OF THE NAZARENE!"

And to commit the ultimate blasphemy — they sing in the song "Blasphemy":

Trey Azagthoh of Morbid Angel claims to be a REAL vampire, and while playing onstage — he actually bites himself and then drinks his own blood!

Dave Mustaine of MEGADETH and SLAYER

Dave Mustaine says now that he's been a born-again Christian for 10-years, he told his agent that he won't perform in concert with “confessed satanists” anymore, but as you just clearly read, SLAYER is as satanic as can be!!! Mustaine said in his March 15, 2012 interview with Alex Jones that he's still willing to open concerts for SLAYER, ANTHRAX and METALLICA.

Dave Mustaine sold his soul to Satan as a young man, just as SLAYER's song NEW FAITH teaches. Slayer sings that the Devil will give you pleasures that you've never knew if you'll simply worship him. SLAYER is Satanic!

Mustaine's band MEGADETH has changed the world for Satan, leading hundreds-of-millions of youth into a heavy Metal culture of infatuation with death, violence, sexual immorality, perversion, blasphemy against God, hatred of the Bible and everything unholy and evil.

It's a bad situation when you've made a career doing something evil and then find the Lord. You have to make a decision between pleasing the Lord or the Devil. Mustaine has chosen to continue ruining the lives of young people, leading them into SLAYER, ANTHRAX , METALLICA and MEGADETH. Did Mustaine really get saved? That's not for me to judge.

Mustaine admits that he has done many horrible things in his life, but I've yet to hear him mention the word “sin.” I have serious doubts about Mustaine's profession of being a born-again Christian. He refers to his salvation as praying a sinner's prayer, but that is NOT THE GOSPEL. Biblical salvation is trusting upon the death, burial and resurrection of Jesus Christ as payment for your sins. Mustaine never mentions any of these truths. He vaguely mentions the name of Jesus and merely speaks of a sinner's prayer, but that is not God's plan of salvation. I once heard a female singer say that she's a Christian because she “prayed the Jesus' prayer.” That's not salvation.

Heavy Metal music is of the Devil. I know that statement offends a lot of people, but you need to decide who you love more, God or the sinful world. James 4:4 and Revelation 3:15-16 teaches that there is no middle-ground. If you befriend the sinful world, then the Bible calls you God's enemy. I am taking a stand for God on this issue, because it needs to be said. Hundreds-of-millions of people worldwide are fans of Dave Mustaine and MEGADETH.

SLAYER and MEGADETH are of the Devil.

The Freemasons worship the goat-headed Baphomet (pictured below), as their god of enlightenment.

The Beast sits atop the world. The moons may also suggest that this is the Prince of Darkness.

The moon is also an accurate metaphor for Satan, masquerading as a 'source of light'

It can only reflect the true light down upon those living in darkness, and it pales in comparison.

Satan is the god of this sinful world (2nd Corinthians 4:4) and as such demands allegiance from those who desire fame, fortune and power. In Luke 4:6 and 7 Satan said to Jesus... "All this power will I give thee, and the glory of them: for that is delivered unto me; and to whomsoever I will I give it. If thou therefore wilt worship me, all shall be thine."

Although Jesus declined Satan's offer, wicked men and women have been accepting Satan's offer throughout history, worshipping the Prince of Darkness. It's simple... if you want to be massively successful in this sinful world, then you've got to sell your soul to the Devil. It's no coincidence that our highest politicians are all going around flashing Satanic hand signs. How do you think they got into power?

... AND THE WORLD PASSETH AWAY! 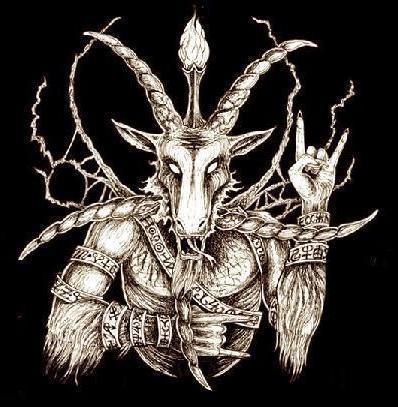