"Beloved, believe not every spirit, but try the spirits whether they are of God: because many false prophets are gone out into the world." —1st John 4:1

Carlos Santana told Rolling Stone magazine in the summer of 1999, more than half a year before his stellar showing at the 42nd Annual Grammys:

“I know it sounds New Age... but in my meditation, this entity - which is called Metatron - he said, 'we want to hook you back to the radio airwave frequency. We want you to reach junior high schools, high schools and universities. Once you reach them - because we are going to connect you with the best artists of the day - then we want you to present them a new menu. Let them know that they are themselves, multidimensional spirits with enormous possibilities and opportunities. We want you to present them with a new form of existence that transcends religion, politics or the modus operandi of education today'”

As with many other Rockers, Santana admits that there is a spiritual entity behind his music. Santana claims that he has had contact with the dead spirit of Jimi Hendrix. Santana claims that his first initiation into the spiritual world took place when he first ingested the illegal drug LSD in the 1960's. Other musicians, such Brian Wilson of The Beach Boys, claim to have experienced type of spirit control. Santana claims that while he played Woodstock, the Mecca of Rock 'N' Roll, his guitar became a serpent before his eyes and inspired the way he played, which has made him famous as a Rock guitarist. Santana admits that his success is tied to a spiritual entity, Metatron. Thus, Santana is of the Devil.

Carlos Santana has his own personal demonic god, Metatron. Here is another disturbing excerpt from Rolling Stone magazine...

"Metatron is an angel. Santana has been in regular contact with him since 1994. Carlos will sit here facing the wall, the candles lit. He has a yellow legal pad at one side, ready for the communications that will come. 'It's kind of like a fax machine,' he says."

By his own words, Santana admits to having communications with a demon named Metatron.

"He tells me more about Metatron. 'Metatron is the architect of physical life. Because of him, we can French-kiss, we can hug, we can get a hot dog, wiggle our toe.' He sees Metatron in his dreams and meditations. He looks a bit like Santa Claus — 'white beard, and kind of this jolly fellow.' Metatron, who has been mentioned in mystical disciplines through the ages, also appears as the eye inside the triangle." [emphasis added] 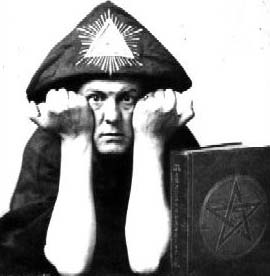 This demonic spirit is at work today like never before through a network of rock stars, movie stars, politicians, educators, religious leaders, entrepreneurs, et cetera. Satan's ultimate goal is to introduce the Antichrist into the world, and for the lost world to readily receive him as an idol (a god), which is what the pyramid and all-seeing eye of Horus amount to. Even today, young people utterly worship their favorite Rock stars, even to the point of offering up their bodies as a sexual sacrifice to them...

"I'm the devil's advocate. We have our own worshippers who are called 'groupies.' Girls will give their bodies to musicians as you would give a sacrifice to a god."

SOURCE: Quote by Frank Zappa, from the book, What About Christian Rock, by Peters Brothers, p. 17

Woe unto Rock music industry and the victims of Rock 'N' Roll. For every young person who defends the evils of Christian Rock music, Satan cheers them for their stupidity and arrogance. There is no such thing as "Christian" Rock. It's all of the Devil. Rock music is a demonic religion of self, immoral sex, substance abuse and rebellion against God.

Carlos Santana claims that the demon Metatron uses Santana's music to connect people with their own divinity. Santana believes that people are their own gods...

“Metatron wants something from me, and I know exactly what it is... The people who listen to the music are connected to a higher form of themselves. That's why I get a lot of joy from this CD, because it's a personal invitation from me to people: Remember your divinity.”

Through meditation, Santana says that demonic spirits tell him what to write for his lyrics and music...

“...you meditate and you got the candles, you got the incense and you've been chanting, and all of a sudden you hear this voice: 'Write this down'”

Any spirit that is not the Holy Spirit is a familiar spirit (a demon). Santana has been taught the doctrines of devils by none other than Sri Chinmoy, the world's foremost teacher of Kundalini Yoga.

What Saith the Scripture?

The Bible condemns dabbling in familiar spirits, i.e., any spirit that is not the Holy Spirit...

Leviticus 19:31 - "Regard not them that have familiar spirits, neither seek after wizards, to be defiled by them: I am the LORD your God."

Leviticus 20:6 - "And the soul that turneth after such as have familiar spirits, and after wizards, to go a whoring after them, I will even set my face against that soul, and will cut him off from among his people."

Leviticus 20:27 - "A man also or woman that hath a familiar spirit, or that is a wizard, shall surely be put to death: they shall stone them with stones: their blood shall be upon them."

Santana is by definition a practicing witch. Witchcraft in it's most basic understanding is seeking power, guidance or wisdom from any spiritual source other than God. There are only two sources of spiritual power: God and Satan.

Santana claims that other artists who participated on his album, Supernatural, were brought to him supernaturally to be a part of Metatron's project. This is not the Holy Spirit at work. Santana claims some were communicated to in dreams and were told they were to be part of the project. Folks, that is the Devil at work (Ephesians 2:2).

Woe unto the world today. Apostasy hasn't been this bad since the days prior to the flood of Noah's day... "And GOD saw that the wickedness of man was great in the earth, and that every imagination of the thoughts of his heart was only evil continually" (Genesis 6:5).

Is this not the world today? You can't even turn on the TV anymore to watch the evening news, or walk into a shopping mall, or read a magazine without seeing immodestly dressed half-naked whorish women flaunted in your face. People's minds are in the garbage pail nowadays, filled with sexually perverted thoughts. This is why all of the sexually degenerate late night shows; such as, Jay Leno, David Letterman and Conan O'Brien are so popular. It is wickedness! It is indeed today as it was in the days of Noah!

American society is so deplorable today that the average Christian has become complacent with hearing sexually-explicit music on the radio. I was in a restaurant the other day and complained to the manager about the music. I said, "I'm a Christian who loves Jesus Christ. The music playing is offensive to me. Not everybody wants to hear 'get down on it' while they're eating."

Sadly, few Christians care enough nowadays to complain; but we need to, if nothing else to take a stand for the Lord Jesus Christ. As society deteriorates further into the abyss of darkness, so do businesses LOWER their moral standards and violate the rights of Christians who don't want to see, hear and participate with it.

God's word warns us to, "Prove [test] all things; hold fast that which is good" (1st Thessalonians 5:21). Santana says he desires to indoctrinate our youth with a new menu and a “new form of existence that transcends religion” [i.e. Christianity, etc]. Parents beware!!! Satan has a bid for your child. Please read, I Want Your Children. In 1st John 4:1 God's Word warns us that we are to try, i.e., TEST the spirits for not every spirit is from God.