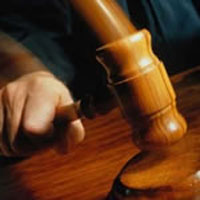 PHOENIX — A 200-year prison term for a man convicted of possessing 20 separate items of child pornography is not constitutionally excessive, the state Supreme Court ruled Wednesday.

In a 4-1 ruling, the majority said the state Legislature is free to decide that those guilty of this crime must serve at least 10 years in prison. And they concluded lawmakers also are free to mandate that the sentences be served consecutively, with no possibility of early release — effectively making it a life term.
But the decision drew a stinging dissent from Justice Rebecca Berch. She pointed out that the high school teacher in this case — who did not produce the materials but simply downloaded them from the Internet — could serve less time for a crime spree that included second degree murder because the law allows that sentence to be served concurrent with other convictions.
Morton R. Berger, who was a history teacher at Cortez High School, was arrested four years ago based on his possession of photographs, computer video files and computer photo files of children, all younger than 15, in sex acts. Prosecutors dismissed 15 counts but got convictions on the remaining 20.
Based on requirements of state law, Maricopa County Superior Court Judge Ruth Hilliard sentenced Berger to the minimum 10 years consecutive terms on each count. He appealed, arguing that violates the Eighth Amendment to the U.S. Constitution which prohibits "cruel and unusual punishment."
But Justice Scott Bales, writing the majority ruling, refused to view this as a 200-year prison term but instead as a challenge to the 10-year minimum sentence required for conviction. And he said that kind of prison term is not excessive.
Bales also said prosecutors were within their right to charge each image as a separate offense. And Bales said Berger accumulated them over a 15-year period.
And the fact that this "stacking" of convictions can result in something longer than a life term does not make it excessive, Bales wrote.
Berch, however, said the sentence fails even on that basis.
She said the 10-year minimum is greater than the maximum prison term that can be imposed in 36 states and equal to the maximum in nine others. And she said only Florida requires separate counts for each item of child pornography, though each count has a five-year maximum and is probation eligible.
Berch also said state laws allow for concurrent sentences when someone is convicted of second degree murder and other offenses. And she said that 10-year minimum is longer than the presumed sentence for rape or aggravated assault — and that Berger would serve no more time for actually molesting a child.
Finally, she also chided colleagues for refusing to measure this as a 200-year prison term for a crime that directly harmed no one.

Something is wrong with our justice system in America. When Ricky “Freeway” Ross was arrested for being one of the biggest drug dealers in the United States (and American history), he only served 14 years in prison. Ross set up his cocaine distribution business under the freeways of Los Angeles to provide easy and quick access for buyers nationwide. Ross boasted of personally profiting over $1,000,000 per day on countless occasions. Ross indirectly murdered thousands of people and destroyed millions of lives for over a decade.

Meanwhile a Kansas City mother was sentenced to life in prison for possessing $40 of cocaine. WHEN KIDS GET LIFE! (over 2,000 U.S. kids under 18 are serving life in prison, verses 12 worldwide). The Godless U.S. Supreme Court removed and banned the Bible and prayer from America's classrooms in 1963, and now we're all paying the price as a nation, and the U.S. Supreme Court wants to wash its hands of the consequences of their careless, immoral and hurtful decisions. Woe unto America!