"And the Lord said, Simon, Simon, behold, Satan hath desired to have you, that he may sift you as wheat." —Luke 22:31 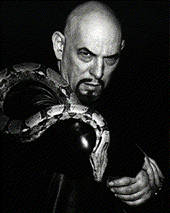 Left:  Anton Szandor LaVey (1930-1997).  Anton LaVey was born on April 11th, 1930. He was and still is known as the Father of Modern Satanism and was the creator and High Priest of the first Satanic Church in San Francisco California. The Church of Satan was created on April 30th, 1966 to celebrate man's carnal beast that lived in the cosmos, motivated by the dark force known as Satan.  He wrote several books including "The Satanic Bible" (which is published by Harper Collins, who also woefully publishes the New International Version of the Bible).  LaVey died, leaving the Church of Satan under the commanding powers of the church's current High Priestess: Blanche Burton (his consort and mother of his third child Satan Xerxes Carnacki LaVey).

One of the top songs of the 70's was "Hotel California" by the Eagles. Most people have no idea the song refers to the Church of Satan, which happens to be located in a converted HOTEL on CALIFORNIA street! On the inside of the album cover, looking down on the festivities, is Anton LaVey, the founder of the Church of Satan and author of the Satanic Bible! People say, the Eagles aren't serious, they're just selling records. That's what you think! The Eagles manager, Larry Salter, admitted in the Waco Tribune-Herald, (Feb. 28, 1982) that the Eagles were involved with the Church of Satan! Not surprisingly, one of the Eagle's songs is titled "Have A Good Day in Hell."

I don't condemn anyone, for the Bible condemns all of us as guilty, dirty, rotten, hell-deserving sinners. My salvation solely rests in Christ's righteousness, because of the precious blood that He gave for our sins. My intention is not to be unkind; but rather, to contend for the Christian faith.

In an interview by Rick Clark, Dolly Parton gave strong indication that she is not a Christian...

"To me, God is that greater, higher energy — that greater, wiser wisdom. It's that thing in all of us that we all have to draw from. I've always trusted God and trusted myself, which to me are intertwined."1

That is New Age doctrine. God is not a higher energy. Biblically, God is a Person, Who manifested Himself to the world through His Son Jesus Christ (1st Timothy 3:16: John 1:1-3,14).

I do not write articles like this to be unkind, but out of necessity to expose those who masquerade as Christians.

Anyone who knows anything about the history of Rock 'N' Roll knows that the band Led Zeppelin is Satanic to the core. I certainly don't condemn Dolly Parton for singing the song. I'm simply pointing out that Satanism is promoted throughout the music industry, whether it be Country, Rock, Hip Hop or even Contemporary Christian Music.

In an interview by Rick Clark on August 2, 2002 at Dolly's office complex in Nashville, Dolly said that she always thought Stairway to Heaven sounded like a spiritual song. She is right, a spiritually demonic song...

RICK CLARK: "When I first heard that you were going to do “Stairway to Heaven,” I thought that was an audacious choice. But when I sang through the melody in my head before I came here, I could hear you singing it."

DOLLY PARTON: "I love that song, and I always thought it sounded like a spiritual song. Robert Plant said he had always thought of it as a spiritual song and was thrilled that I had put the choir on it, 'cause he had always heard it like that. I believe a good song can be done any way if you really mean it from the heart.  Everybody's been trying to get a copy of my version of this song. They've been offering everybody money to bootleg it.  Rock stations have been calling us, and country stations just out of curiosity.  I'm sure some of them think it's a big joke.  I'm sure that some of them are going to want to crucify me, and maybe they will. But in all sincerity, I did it because I love the song."

Stairway to Heaven is a spiritual song, but it's of the spirit of Satan, not God. Stairway to Heaven is Satanic to the core. Music is one of the most powerful mediums through which Satan works. John Denver said, "Music is more powerful than Christianity." The sinful flesh loves Devilish music... music which has a Rock 'N' Roll beat and worldly lyrics. Rock music is highly addictive.

Led Zeppelin also introduced personal occult symbols on one of their albums. Guitarist Jimmy Page of Zeppelin is a devout follower of Satanist, Aleister Crowley, who proclaimed himself as "The Beast 666". In 1971, guitarist Jimmy Page bought Crowley’s Boleskine House on the shore of Loch Ness where Crowley practiced his hellish, satanic sex-magick rituals, including human sacrifices. Guitarist Jimmy Page actually performed Crowley magical rituals during their concerts.

Their song "Stairway to Heaven" carries the reference "May Queen," which some have claimed to be the name of a hideous poem by Crowley. Page had inscribed in the vinyl of their album Led Zeppelin III, Crowley's famous "Do what thou wilt. So mete it Be’. Page and Robert Plant claim some of Zeppelins' songs came via occultic "automatic handwriting", including their popular "Stairway to Heaven". Stephen Davis in the Hammer of the Gods, details the occult inspiration of "Stairway to Heaven".

"He [Robert Palmer] often remarked that he could feel his pen being pushed by some higher authority." (Stephen Davis, Hammer of the Gods, p. 262)

There is no doubt to the occult influence of Led Zeppelin. For a very through, extensively documented history of Zeppelin’s occult inspiration read the 648 page book titled, Fallen Angel: The Untold Story of Jimmy Page and Led Zeppelin by Thomas Friend.

Zeppelin’s "personal symbols" were etched in occult images. For instance, "Zoso" was Jimmy Page’s personal symbol and according to Stephen Davis in The Hammer of the Gods (p. 253), it is a "stylized 666". To further document Page’s "Zoso" emblem’s connection to Satanist Crowley and the number 666, the following page is from Crowley’s book The Equinox of the Gods (p. 253):

Again, my only intent here is to show that Satanism is widespread throughout the music industry and not to condemn anyone on a personal level. It is not my place to judge. 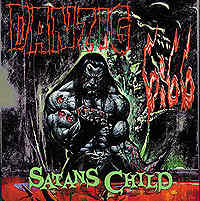 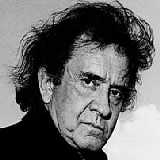 Johnny Cash seems to have sold his soul to Satan. He is recognized worldwide as a Christian. The album cover to the left is Glenn Danzig's... notice "DANZIG, Satan's Child and 6:66." The group Danzig, led by Glenn Danzig, is one of the most openly Satanic bands in rock.

Glenn Danzig, spewing his hatred for the Lord Jesus Christ, proudly designed a logo for the band—a demon strangling Jesus Christ with blood gushing from Jesus' eyes! One of Danzig's song is "Serpent Jesus, Snakes of Christ." On the inside of their album, "Danzig II — Lucifuge," Glenn Danzig is wearing the demonic upside-down cross, with the words of John 8:44 brazenly above him, "Ye are of your father the devil, and the lusts of your father ye will do." One of Danzig's other logos is a Satanic Pentagram.

Again, my only intent here is to show that Satanism is widespread throughout the music industry and not to condemn anyone on a personal level. I don't know if Johnny Cash was a Christian or not.

There will be many more contemporary artists recording older songs which were performed or written by Satanists. Worldly music is just something that we can't get away from... it's in the stores... at work... in restaurants, etc. I've notice lately that the music industry is continually promoting homosexuals and Satanists. Martina McBride sings "I met God's Will on a Halloween night" (From her song: God's Will). Elton John is more popular than ever. So is Boy George and Michael Jackson. I hear Robert Plant singing the song Sea of Love. The Eagles' songs are still extremely popular... ALL occult inspired musicians or Sodomites.

Most people don't realize that bands like Earth, Wind, and Fire use occult symbols on their albums. Now occultists are promoting Satan in Country music to further corrupt society. Satan has already infiltrated the Gospel music industry with worldly bands such as P.O.D., Stryper, tobyMac, et cetera. Then there's Amy Grant making her famous El Diablo hand sign on stage.

Be warned friend, the Devil is working relentlessly to corrupt what's left of family values and moral character in America. You're going to see Satanism trying to creep it's way into our lives in every way possible. With Harry Potter, Devilish shows like Charmed and Witches, Country singers popularizing songs written by Satanists, the godless Public School System, multitudes of corrupted Bible versions, pagan holidays, Rock 'N' Roll music, Rap, Punk, Godless CCM music, false religions, sexually degenerate TV, apostasy in the church, abortion, adultery, homosexuality, and every other evil imaginable... how long can America last??? Even the New King James Bible has an occult symbol on the front cover.

According to the book, Satanism in America, which is endorsed by the National Criminal Justice Task Force on Occult Related Ritualistic Crimes, hard-core Satanism is "the fastest-growing subculture among America's TEENS."

Studies taken by the Georgia Police Academy revealed that 90% of those involved in Satanism are TEENAGERS!

Television personality, Geraldo Rivera, who explored the terrifying rise of Satanism said, "It exists AND IT'S FLOURISHING. IT IS TEENAGERS who are most likely to fall under the spell of Satanism."

How serious are they?

At the 1992 MTV Awards, the group Red Hot Chili Peppers, upon receiving their award and giving thanks, said:

"Nevertheless when the Son of man cometh, shall he find faith on the earth?" -Luke 18:8