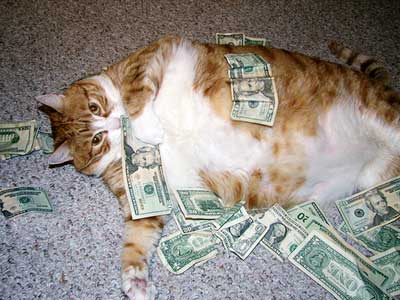 A picture is truly worth a thousand words. Does not this fat cat perfectly portray nearly every televangelist today? Is that Joel Osteen, T.D. Jakes, Pat Robertson, Joyce Meyers, Benny Hinn, Melissa Scott, James Robison, Don Stewart, Peter Popoff or Mike Murdock in the picture? It could be any one of them!

God never intended for the Church to become a business. New Testament Christians were not required to obtain a State license to have a church. They met in each other's homes (Colossians 4:15; Philemon 1:2) and went publicly from door-to-door preaching the Gospel (Acts 20:20).

I think arguably the biggest sin in churches today is the love of money. It is love of money that has crippled pulpits all across America. You'll be hard-pressed nowadays to find a church where the pastor is a genuine man of God who hates sin enough to preach against it. God hates sin and a man who walks with God will get upset about sin.

Isaiah 58:1, “Cry aloud, spare not, lift up thy voice like a trumpet, and shew my people their transgression, and the house of Jacob their sins.” The same holy God who hated sin in the Old Testament hates sin in 2009. Malachi 3:6a, “For I am the LORD, I change not.” God is immutable, i.e., He is incapable of changing. God is holy (morally perfect).

It is tragic that America's churches are being infiltrated by a bunch of religious fatcats. I recently visited a Baptist church where the pastor made references to both Rick Warren and Pat Robertson as being godly men. Rick Warren is an Illuminati plant, intended to lead evangelical Christians into apostasy. His Purpose-Driven Life is of the Devil.  Pat Robertson preaches a false Gospel and refuses to disclose to the Better Business Bureau where hundreds-of-millions of donation dollars are being spent. Benny Sin is even worse. They're all a bunch of fat cats!

America's pastors have become puppets to fat cat pulpit committees, who have NO business telling the preacher what he can or cannot say from behind the pulpit. A pastor should preach from his heart, and not from a sermon outline. No pastor should allow a pulpit committee to control what he can or cannot say. I know of a local church, a Baptist church, where the pulpit committee forbids their pastor from criticizing the “Catholic” cult by name in his preaching. The area is predominantly Catholic and the fat cats who control the church are afraid of losing money. That is apostasy! I'll tell you, it will be a cold day in Hell before any pulpit committee will ever say a word about my preaching. I'm not for sale. I'll preach what God puts in my heart to preach! God deliver us from fat cats.

It is sad and tragic that so many Christians today, especially pastors, have erred from the Biblical faith because of covetousness. Nothing will steer a pastor away from the Christian faith faster than money. This is why the truth is being censored so horribly in these apostate times. We are warned in 1st Timothy 6:10, “For the love of money is the root of all evil: which while some coveted after, they have erred from the faith, and pierced themselves through with many sorrows.” What a needful Scripture for these times! Carefully notice that the priority to make money causes one to err from the faith. The word “erred” in 1st Timothy 6:10 doesn't mean “to depart from the faith” or “to forsake the faith.” No, rather, it means “to stray away from the faith, or “to get off course.”

Pastors who make money an issue will trim their preaching. It's the love of money that causes Christians to hide their candle under a bushel. That's why most pastors today have become psychologists instead of preachers. You'll never hear them get angry over sin and yell at the Devil from the pulpit. Billy Sunday was a true preacher, who was known for throwing chairs and yelling harshly against the awfulness of sin! Does your pastor preach against the awfulness of sin from the pulpit?

I dare you to find even one mainstream Contemporary Christian Music (CCM) singer who presents the Biblical Gospel on their website. Good luck searching. I haven't found one. It's all about the money. If they presented the Gospel, their sponsors and fans would drop them like a burning hotcake. Fans of Christian Rock music aren't coming to Jesus Christ, their coming to worldliness. Take away the carnal music and you won't have any fans. As churches become more worldly, so are worldly sinners becoming more churchy.

Tens-of-thousands of selfish people come to hear Joel Osteen speak every week, because he doesn't preach against sin and they know he won't preach a Hell, fire and damnation sermon... he just tickles their ears with what they want to hear. You've heard of Tickle-Me-Elmo, well now there's a real-life Tickle-Me-Joel, because that's all he does... tickles people's ears with heresy. 2nd Timothy 4:3-4, “For the time will come when they will not endure sound doctrine; but after their own lusts shall they heap to themselves teachers, having itching ears; And they shall turn away their ears from THE TRUTH, and shall be turned unto fables.”

The Bible teaches that in these Last Days, people will not tolerate SOUND DOCTRINE, i.e., the truth of God's Word. They'll tolerate homosexuality, abortion, gambling, drunkenness, fornication, two-bit miniskirt wearing hussies, the Devil's music and all other forms of sin; but they WON'T tolerate THE TRUTH!!! That's what the Bible says! People will go to a church if the pastor is a wimp who never calls sin by name, never raises his voice against evil, never gets upset over the wickedness of our generation; but most people want absolutely nothing to do with a man like John the Baptist who preaches against sin. A genuine man of God is bold and says it like it is, he doesn't pass out menus or test the waters first.

We read in Proverb 28:4, “They that forsake the law praise the wicked: but such as keep the law contend with them.” I guarantee you that the pastors who are endorsing Obama's presidency are the same rascals that DON'T believe that the King James Bible is the inspired and preserved Words of God. No Christian who believes the Bible and loves the Lord Jesus Christ would ever support a U.S. President who wants to expand adoption rights for homosexuals, legalize same-sex marriage, confiscate citizen's guns, expand global abortion programs, and further the United States as a Communist nation. And that's just the tip of the iceberg. America is heading for imminent moral, economic and spiritual destruction! The average American is so ignorant of what's really going on that they can't even form a proper opinion. Most people are stuck on one issue or another. The big picture is that American has already gone to Hell.

We get what we deserve as Americans!