Jesus: A Man of Sorrows

"He is despised and rejected of men; a man of sorrows, and acquainted with grief..." (Isaiah 53:3) 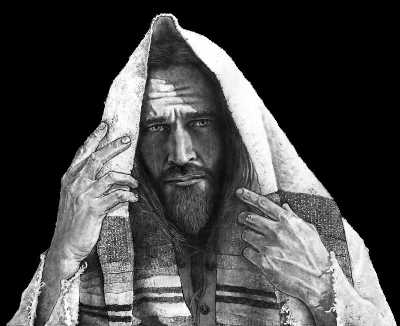 Contrary to the health, wealth and prosperity image of Jesus Christ that Charismatics put forth, He was despised and rejected of men, a man of sorrows and acquainted with grief. Jesus said He had no pillow to place His head upon at night... "The foxes have holes, and the birds of the air have nests; but the Son of man hath not where to lay his head" (Matthew 8:20). Jesus was homeless.

Everywhere Jesus went, He was scorned and ridiculed because of His youth... "Then said the Jews unto him, Thou art not yet fifty years old, and hast thou seen Abraham?" (John 8:57). Yet, Jesus spake as no man had ever spoken... "The officers answered, Never man spake like this man" (John 7:46). Jesus was a remarkable young man who spoke with Authority, i.e., the Truth of God's Word; and He was hated for it... "But now ye seek to kill me, a man that hath told you the truth, which I have heard of God: this did not Abraham" (John 8:40). "And because I tell you the truth, ye believe me not" (John 8:45). Jesus was sorrowful that the Jews didn't believe His Word.

When Jesus went to His own town of Nazareth, they rejected Him... "And he said, Verily I say unto you, No prophet is accepted in his own country" (Luke 4:24). Jesus was angry and grieved because of the hardness of the Jew's hearts... "And when he had looked round about on them with anger, being grieved for the hardness of their hearts, he saith unto the man, Stretch forth thine hand. And he stretched it out: and his hand was restored whole as the other."

In Luke 8:52, 53 we read that the crowd laughed Jesus to scorn when He said He could raise the dead... "And all wept, and bewailed her: but he said, Weep not; she is not dead, but sleepeth. And they laughed him to scorn, knowing that she was dead."

When Lazarus died, the Jews had no faith and it grieved Jesus' heart. Instead of having faith that He could raise the dead, they criticized Jesus for allowing Lazarus to die in the first place...

"When Jesus therefore saw her weeping, and the Jews also weeping which came with her, he groaned in the spirit, and was troubled, And said, Where have ye laid him? They said unto him, Lord, come and see. Jesus wept. Then said the Jews, Behold how he loved him! And some of them said, Could not this man, which opened the eyes of the blind, have caused that even this man should not have died? Jesus therefore again groaning in himself cometh to the grave..." (John 11:33-38).

This troubled the Lord, understandably. No matter how many miracles Jesus performed, and how many people He healed, and how many good things He did to help others; the crowd always criticized Him, demanding more miracles and questioning His Word and deity...

"But though he had done so many miracles before them, yet they believed not on him" (John 12:37).

Even Jesus' own disciples didn't believe Mary when she said Jesus had raised up from the dead as He had promised...

"And they, when they had heard that he was alive, and had been seen of her, believed not. After that he appeared in another form unto two of them, as they walked, and went into the country. And they went and told it unto the residue: neither believed they them. Afterward he appeared unto the eleven as they sat at meat, and upbraided them with their unbelief and hardness of heart, because they believed not them which had seen him after he was risen" (Mark 16:11-14).

Oh how the human heart is prone to unbelief... "The heart is deceitful above all things, and desperately wicked: who can know it?" (Jeremiah 17:9). Jesus loved people and wept over Jerusalem because of the unbelief of the Jews...

No matter what Jesus did to open the eyes of the Jews, they always came back wanting more proof...

"Now when John had heard in the prison the works of Christ, he sent two of his disciples, And said unto him, Art thou he that should come, or do we look for another? (Matthew 11:2,3).

"If ye had known me, ye should have known my Father also: and from henceforth ye know him, and have seen him. Philip saith unto him, Lord, shew us the Father, and it sufficeth us. Jesus saith unto him, Have I been so long time with you, and yet hast thou not known me, Philip?..." (John 14:7-9).

"Let Christ the King of Israel descend now from the cross, that we may see and believe" (Mark 15:32).

"Likewise also the chief priests mocking him, with the scribes and elders, said, He saved others; himself he cannot save. If he be the King of Israel, let him now come down from the cross, and we will believe him" (Matthew 27:41,42).

"And the soldiers also mocked him, coming to him, and offering him vinegar, And saying, If thou be the king of the Jews, save thyself" (Luke 23:36,37).

"And Jesus walked in the temple in Solomon's porch. Then came the Jews round about him, and said unto him, How long dost thou make us to doubt? If thou be the Christ, tell us plainly. Jesus answered them, I told you, and ye believed not..." (John 10:23-25)

"And one of the malefactors which were hanged railed on him, saying, If thou be Christ, save thyself and us." (Luke 23:39).

It is clear from the Scriptures why the Lord was a man of sorrows, because everywhere Jesus went the Jews mocked Him, rejected Him and refused to believe. They always demanded more evidence. Thankfully, many of the Jews who witnessed Jesus raise Lazarus from the grave DID believe (John 11:45). Even some of the Pharisees believed (John 12:42). However, the majority of the Jews hated Jesus and in their anger demanded His crucifixion, saying to Pilate who sought to release Jesus... "His blood be on us, and on our children" (Matthew 27:25). Literally, the Jews said to Pilate, "Kill Jesus and we'll gladly take responsibility for it." And so it was.

In John 16:33 Jesus said, "These things I have spoken unto you, that in me ye might have peace. In the world ye shall have tribulation: but be of good cheer; I have overcome the world." Jesus said in John 16:22, "And ye now therefore have sorrow: but I will see you again, and your heart shall rejoice, and your joy no man taketh from you." We are living in a cruel, selfish and hateful world where people oftentimes rob us of our joy. People are as rotten as can be in today's American society (see 2nd Timothy 3:1-7). But Jesus said the day will come when He comes back to get us, that we may live with Him in Heaven, and we shall rejoice in the peace and rest that He will give to us. No one will ever make us sad again! What a day that will be!!! Although the world is a miserable place to live, God promises a bright and peaceful future in Heaven for the Christian believer, i.e., those who have been born-again in Christ Jesus.

"Verily, verily, I say unto you, That ye shall weep and lament, but the world shall rejoice: and ye shall be sorrowful, but your sorrow shall be turned into joy." —John 16:20