Hated By The World

The unsaved world has always hated Christians.  We are hated because we have Christ's Spirit within us, "...Now if any man have not the Spirit of Christ, he is none of his" -Romans 8:9.  The world hated Jesus with a passion, so much that they murdered Him upon a cross.  In the photo to the right we see Stephen being stoned to death by a worldly mob.  We read in Acts 7:58-59, "And cast him out of the city, and stoned him: and the witnesses laid down their clothes at a young man's feet, whose name was Saul.  And they stoned Stephen, calling upon God, and saying, Lord Jesus, receive my spirit."  No wonder Paul the Apostle (formerly Saul) said that he was the chief of sinners, for it was the same Saul mentioned in the verses we just read.  Paul was a murderer of Christians before he became saved.  This is proof that anyone can be saved, no matter what they have done.  The only unpardonable sin is to reject Jesus as Saviour.  To reject Jesus is to blaspheme Christ's Spirit (Romans 8:9-11).

The World Loves It's Own

John 15:19 tells us that the world only accepts it's own.  If we live as the heathens, then the world will accept us.  The world will never accept any Christian who honors God by obeying the Bible.  I've been around heathens in the workplace my whole life. I don't have to say a word to them and they still KNOW that something is very different about me.  That difference is the Holy Spirit in my heart.  They curse in God's name, but they never hear me say it.  And when they do curse in God's name, they see the look of disapproval on my face.  They look at porno, but I walk away.  They invite me to the strip-joints, but I never go.  They talk filthy, but I change the subject or try not to get into conversations with them.  It is unavoidable that at some point they always ask if I'm religious.  This is when I witness to them.  I have witnessed to many people in the secular workplace, some listen, most don't.  Thankfully, I've had the opportunity of leading a few men to the Lord in the workplace.  I've learned that God DOES work in people's hearts.  And it's often the person whom you thought didn't care.  It is unavoidable, Jesus and the Bible are a Pandora's box to the unsaved world.  The Holy Spirit does convict people, and it makes many unsaved people very angry!  The same Sun that melts the wax, hardens the clay.

Expectedly, I've always experienced persecution in the secular workplace.  There's a lot of hateful people in the world, and they greatly hate Jesus and the Word of God.  People don't mind if you're religious, just so long as it's not the Truth.  I've noticed that heathens have no problem with false religions, but you mention the Truth concerning Jesus Christ and watch the sparks fly.  People don't mind religious magazines or newspapers, but open a King James Bible and see what happens...people freak out!!!  I was reading my Bible one day at work in the lunch room and one of my coworkers just started belittling me in front of everyone.  Another guy said that he felt very uncomfortable with me bringing a Bible into the workplace every day.  I literally carried it under my arm into the workplace each day.  Some of those people hated my guts.  It's no surprise that the new heathen boss conspired against me and fired me, after being employed there for four years.  I was blamed for something I didn't do.  I literally was fired for missing a "zerk" grease fitting on a truck.  It was my word against the bosses.  He also claimed that I left a fuel filter loose.  We had another mechanic double-gasket an oil filter which ended up destroying a DT-466 Diesel engine when it ran out of oil on the highway.  A double-gasket happens when you don't remove the old gasket before installing a new spin-on oil filter.  The guy wasn't even disciplined.  But I got fired for petty accusations which weren't substantiated.  The world loves it's own, but hates Christians because we have Christ in us.  It's Jesus that the world hates, not us.

"Blessed are ye, when men shall hate you, and when they shall separate you from their company, and shall reproach you, and cast out your name as evil, for the Son of man's sake.  Rejoice ye in that day, and leap for joy: for, behold, your reward is great in heaven: for in the like manner did their fathers unto the prophets." -Luke 6:22,23

Jesus is the greatest name in the world.  Philippians 2:9-11 reads, "Wherefore God also hath highly exalted him, and given him a name which is above every name: That at the name of Jesus every knee should bow, of things in heaven, and things in earth, and things under the earth; And that every tongue should confess that Jesus Christ is Lord, to the glory of God the Father."  Jesus is the most wonderful and Precious name in the universe.  The world didn't just hate Jesus when He came to this world to pay for our sins, the world hates Jesus just as much today.  The world hates Jesus because He stands against their wickedness, "The world cannot hate you; but me it hateth, because I testify of it, that the works thereof are evil" -John 7:7.  It's not us they hate, it's Jesus.  John 3:20 declares, "For every one that doeth evil hateth the light, neither cometh to the light, lest his deeds should be reproved."  This is why the wicked world hates Jesus and His Word.  The Bible is a "sin-detector."  People get convicted about their sins when they here the Bible, so they shun it away as foolishness..."For the preaching of the cross is to them that perish foolishness; but unto us which are saved it is the power of God" -1st Corinthians 1:11.  The world mocks and laughs at the things of God, but Jesus is precious to the born again Christian (1st Peter 2:7).  Jesus said that the servant is not greater than the master.  If Jesus was persecuted, then so will we if we live for Jesus.  The early church in Acts was persecuted.  James was killed by the sword in Acts 12.  Stephen was stoned to death in Acts 7.  Today's churches are so dead that they don't even know what persecution means.

"Am I therefore become your enemy, because I tell you the truth?" -Galatians 4:16

I know what persecution means as an individual believer...I've been spit on...I've had things (like a hammer) thrown at me, I've had to physically fight to defend myself...I've been thrown out of ministries and called a "heretic" for defending the King James Bible...I've been lied about...I've been called a hypocrite...I've had people spread malicious horrible rumors about me...I've been grabbed by the throat and thrown up against the wall...I've had things stolen from me...and a whole lot more.  Yet, I haven't been killed so I consider myself blessed.  One man smashed my radio on the floor at work because he hated my Christian music, but he played Van Halen and AC/DC whenever he wanted.  I told my boss and he said," If you can't take the heat, get out of the kitchen."  This is the way of the world.  People are just selfish, cruel, and don't care!  I count myself blessed to be able to suffer persecution for my Saviour.  2nd Timothy 3:12 reads, "Yea, and all that will live godly in Christ Jesus shall suffer persecution." 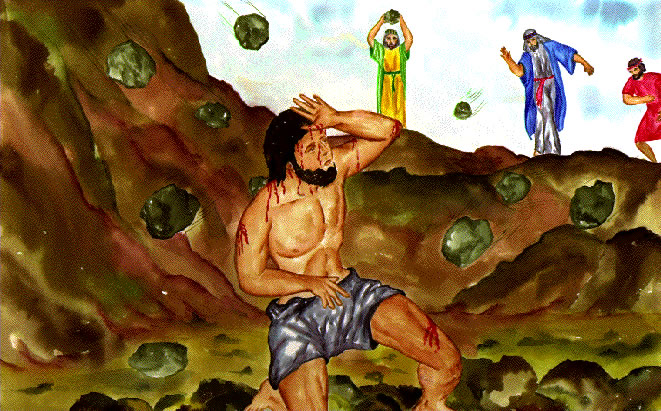 "If ye were of the world"

Jesus said that the world would receive us IF we were of the world.  As Christians, we are commanded in 2nd Corinthians 6:14-27 to SEPARATE from the heathen world (unbelievers).  It's difficult to do this if you work with unbelievers in the secular (non-Christian) workplace.  It is lonely for a Christ-honoring Christian to have to work with heathens in a secular workplace.  If you are a True Christian, then God is your Heavenly Father; but all unsaved people are children of the Devil.  Unsaved people are receptive to Satan's spirit (Ephesians 2:2).  Thus, the Christ-honoring believer endures continual scrutiny and malicious attack.

"Wherefore ye be witnesses unto yourselves, that ye are the children of them which killed the prophets." -Matthew 23:31

But if you want to live for God, then you must take a stand for Jesus.  A young man asked an old preacher, "How do I give up the world?"  The old preacher replied, "Son, you carry a Bible and the world will give you up."  Sadly, most believers are so carnal nowadays that you can't tell them apart from the heathen.  I am always saddened when I see professed Christians in the workplace looking at porno, cursing in God's name, or using filthy profane language.  I know it's tempting at times, and it's easy to forget that we are Christians sometimes; but we must be consistent in our Christian walk if we expect God to work in our lives.  A beautiful water-bucket is worthless if it has a hole in the bottom and can't hold water.  Likewise, there are many beautiful looking believers with many talent, but they are useless to God because of the sin in their lives.  God doesn't need our talent, he needs our obedience.  God doesn't need our beauty, he needs our heart.  I would rather be rejected by the world and be accepted with Jesus.   James 4:4 plainly teaches that we are God's enemy if we are a friend to (or assist) the world.  As Moses, I would rather suffer affliction with the people of God, than to enjoy the pleasures of sin for a season (Hebrews 11:25).  Sin is only for a short season, but the things we do for God will abide forever.  But first, nothing else matters if you die in your sins without Christ.  Click here if you'd like to learn how to be saved.

"Blessed are ye, when men shall revile you, and persecute you, and shall say all manner of evil against you falsely, for my sake.  Rejoice, and be exceeding glad: for great is your reward in heaven: for so persecuted they the prophets which were before you." -Matthew 5:11