“Are they not all ministering spirits, sent forth to minister for them who shall be heirs of salvation?” —Hebrews 1:14 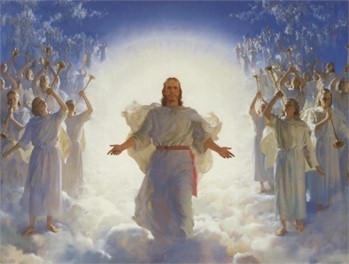 The term “angel” or “angels” appears 109 times in the Old Testament and 180 times in the New. The Bible has much to teach us concerning the angels and demons. In Revelation 5:11, the Apostle John said he saw 10,000 times 10,000 angels and thousands of thousands. So we know that there are over 100,000,000 angels. The “stars of heaven” in Revelation 12:4 is believed by most theologians to refer to the fallen angels who rebelled against God with Lucifer and were cast down to the earth.

In Mark 5:9, Jesus met a demon possessed man. When asked the devil's name, they said “legion” because they were so many. That's very interesting. Not all demon-possessed people foam at the mouth, cut themselves and throw themselves into a fire. The Scriptural word for “possessed” actually means “to have a demon.” Thus, it is possible for someone to be partially controlled by a demonic influence and still appear as a normal person. It certainly appears that American society today is largely demonically inspired.

Interestingly, demons never appeared in bodily form in the Scriptures; but rather, always required a human host to reside in. In Matthew 8:28-32, the Bible states that Jesus met two people possessed with devils. The devils feared Jesus, asking if He had come to "torment" them before their time. This clearly teaches that demons, i.e., fallen angels, know that their time is short and judgment awaits them. The Devil and his angels will be tormented for eternity for their rebellion against God (Matthew 25:41, King James Bible). The devils requested for Jesus to allow them to enter into a herd of swine, and so it was. So we learn Biblically that demons can possess either a human being or an animal.

In sharp contrast, angels sent from God DID appear in bodily form in the Bible at times. Sometimes they were visible to the human senses, and other times were not. Normally angels cannot be detected by our human senses; but in 2nd Kings 6:15-17, the prophet Elisha asked God to open the eyes of his servant to see the horses and chariots of fire marching around the city. In Genesis 18:1-2, Abraham saw three angels who looked just like regular men from his tent door. We see this throughout the Scriptures. The Bible tells us in Hebrews 13:2, “Be not forgetful to entertain strangers: for thereby some have entertained angels unawares.” This is a remarkable Scripture. If we were to ever meet an angel, we wouldn't know it. The Bible plainly states that some believers have associated with angels “unawares.” If you did meet an angel, you would not be able to distinguish him from any other man.

The Bible teaches in Hebrews 1:14 that angels are sent forth by God to serve the Saints, “Are they not all ministering spirits, sent forth to minister for them who shall be heirs of salvation?” This is a wonderful truth. It is a joy to know that each Christian believer has a guardian angel assigned to watch over us . . . “Take heed that ye despise not one of these little ones; for I say unto you, That in heaven their angels do always behold the face of my Father which is in heaven” (Matthew 18:10). Our angel watches the face of God, awaiting the Lord's next command. Psalm 34:7 states, “The angel of the LORD encampeth round about them that fear him, and delivereth them.” Amen! We are not supposed to be looking for angels in any way and we are not supposed to do things to please them. We are to please God. Angels minister to us so that we may give ourselves to the Lord and serve Him.

Angels Can Eat And So Will We In Our Glorified Body

The Bible mentions angel's food. Evidently the angels do eat (sorry for all of you who were hopping for Angel's Food Cake in the Bible... lol).

Angels can eat! Genesis 19:1 and 3, “And there came two angels to Sodom at even; and Lot sat in the gate of Sodom... And he pressed upon them greatly; and they turned in unto him, and entered into his house; and he made them a feast, and did bake unleavened bread, and they did eat.” There are NO female angels, they always appear as being male.

Jesus also ate in His resurrected body. Luke 24:42 says that Jesus in His resurrected body ate some broiled fish and honey. Amen! The Word of God teaches that every believer will receive a glorified body at the Rapture. Philippians 3:21, “Who shall change our vile body, that it may be fashioned like unto his glorious body, according to the working whereby he is able even to subdue all things unto himself.” We will be able to eat and enjoy all manner of delicious foods, and I'm looking forward to eating some awesome recipes and great cooking! Everyone has a favorite restaurant or food. Just think about all the great secret family recipes around the world that we've never tasted! God will make Heaven better than we could ever imagine. But you have to be saved or you won't go! Ye must be born again!

What a wonderful thing to look forward to in eternity. Jesus in His resurrected body ate and drank with His disciples. The Bible says that every saint will receive a body fashioned like unto the Lord's at the Rapture (i.e., the first resurrection - Revelation 20:6; Philippians 3:21). I look forward to playing musical instruments in eternity, fellowshipping with my heavenly family and angels and enjoying all the blessings that God has for us in Heaven. Romans 8:32 teaches that God, Who gave His only begotten Son for us, will give us ALL THINGS. We are so undeserving. Isn't the grace of God wonderful!!! Jesus is precious!

The angels have a physical body. It is difficult to understand how spirit beings can appear in a physical body, but we know that they do. How did the Lord Jesus bodily appear in the fiery furnace with Meshach, Shadrach and Abed-Nego in Daniel's time? The Messiah had not yet been born into the world; yet we see Christ in a physical body appearing as the angel of the Lord.

Psalms 90:4, “For a thousand years in thy sight are but as yesterday when it is past, and as a watch in the night.”

There is no command in the Scriptures for us to seek communication with the angels, nor for us to look for them to appear. Hebrews 13:2 simply advises us to be kind and hospitable to others, which we should do anyway as Christians. 1st Timothy 2:5 plainly states that Jesus Christ is the ONLY Mediator between God the Father and mankind. Revelation 4:11 tells us that all things were created for God's pleasure . . . “Thou art worthy, O Lord, to receive glory and honour and power: for thou hast created all things, and for thy pleasure they are and were created.” This ought to be our desire as Christian believers—to please God.

Much of the false Christianity we are hearing about nowadays, such as the apostate ministry of Joel Osteen, is centered upon pleasing ourselves. The Bible does NOT teach a health, wealth and prosperity type of Gospel. The Bible tells us that God has chosen the poor of this world rich in faith (James 2:5). 2nd Timothy 3:12 tells us that those who live godly in Christ Jesus SHALL suffer persecution. In Matthew 16:24 Jesus spoke of denying one's self, taking up a cross and following Him . . . “Then said Jesus unto his disciples, If any man will come after me, let him deny himself, and take up his cross, and follow me.” Biblical Christianity is no picnic. If you live for the Lord, the world will give you up and hate you (John 15:19). We are to focus on pleasing God, not His created beings (Proverb 16:7; Colossians 1:10; 1st Thessalonians 4:1; 2nd Timothy 2:4).

The Scriptures tell us about the angels to encourage us. 1st Peter 5:7 tells us that God cares about us as His children and encourages us to “cast” our cares upon Him. God has His created beings watching over us and caring for us, beholding the face of the Father in Heaven (Matthew 18:10). When we pray, God listens (Psalm 65:2). In Daniel 10:12-13 we read that Daniel prayed, and then God sent the angel Michael in answer to Daniel's prayer. All God expects of us is that we pray about everything (Philippians 4:6) and wait upon the Lord.

Our responsibility is to pray, and then leave the rest up to God. Romans 8:28 promises: “And we know that all things work together for good to them that love God, to them who are the called according to his purpose.” It is comforting to know that God is watching over us and nothing can happen to us outside of God's permissive will. The greatest comfort of all is in 1st John 4:4 . . . “Ye are of God, little children, and have overcome them: because greater is he that is in you, than he that is in the world.” Jesus Christ abides within body of every believer (Romans 8:9).