The Men Who Rejected Jesus Christ

I want to share with you something said by one of the wealthiest entertainers in the world...

"One time, I got on my tour bus after a gig and we drove for seven or eight hours. We stopped at a truck stop in the early hours of the morning for a cup of coffee. We were out in the middle of nowhere. And this guy walks up to me and gives me one of these leaflets: "Jesus saves." And I say to the guy, "Where did you come from? There's nothing for miles and miles around here." He says, "I've been following you all night." I says, "You been following the bus all night just to give me this fu%#**! piece of paper? You don't want to go a church, my friend. You want to go see a fu%#**! psychiatrist." (Source: Ozzy Osbourne interview, 'Ozzy Meets Marilyn Manson,' 1997) 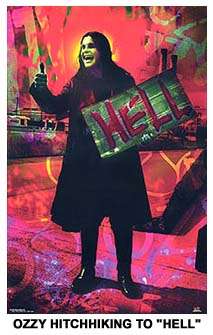 It doesn't surprise me so much that a secular entertainer would reject a Gospel tract, but what really impressed upon my heart was the fact that a soulwinner had followed behind a tour bus all night simply to witness to Mr. Osborne. What Ozzy Osborne considers insane was nothing less than the love of God working in the heart of one of God's children. Ozzy's heart is so cold towards God that he actually told someone who cared about him to go see a psychiatrist. I guess that shouldn't be too surprising considering that Mr. Osborne is famous for biting the head off in live bat. Who needs to go see a psychiatrist?

You know, if someone followed behind me all night to share their beliefs with we, I would be moved by that. Even if I totally disagreed with the person, I'd at least thank the person for caring about me. Out of the words of Ozzy Osborne's own mouth, he condemns himself. Ozzy admits openly that he rejected the opportunity to receive Jesus Christ as his personal Saviour. Ozzy didn't just tell the man to go away, he cursed that little piece of paper that read "Jesus Saves". Mr. Osborne said, "You been following the bus all night just to give me this fu%#**! piece of paper?" We'll Mr. Osborne, that fu%#**! piece of paper was the Gospel of Jesus Christ. Furthermore, Ozzy Osborne remembers exactly what the title of that little piece of paper was... JESUS SAVES!

"In flaming fire taking vengeance on them that know not God, and that obey not the gospel of our Lord Jesus Christ:" —2nd Thessalonians 1:8

Ozzy Osborne (who has a net worth in 2015 of $220,000,000) KNOWS the truth, but he has willingly rejected it. According to the above Scripture, hell awaits Mr. Osborne and all others who obey NOT the Gospel of our Lord Jesus Christ. Ozzy cannot take even one penny with him past the grave. It will be a horrifying scene when Ozzy is judged by God for destroying the lives of millions of youth with his demonic music. In Hell Ozzy will never see his wife Sharon again, nor her him, nor their children, but they will all burn for all eternity. Maybe that offends you, but it is brutally honest. If you don't agree, it is only because you foolishly reject the Bible as God's Word. Jesus, after bodily resurrected, said in Luke 24:25, “Then he said unto them, O fools, and slow of heart to believe all that the prophets have spoken.” Are you a fool? You are if you don't believe the inspired Words of the King James Bible!!!

Though Mr. Osborne denies being a Satanist, his music is certainly Satanic. Even Anton LaVey who founded the Church of Satan claimed while living not to believe in a literal Satan; yet, his widow has publicly stated that Mr. LaVey DID believe in a literal Devil. Most Satanists deny the existence of a literal Devil. They do that on purpose, because the Holy Bible teaches in 2nd Corinthians 11:13-15 that Satan transforms himself into an angel of light (appearing as Christ) to deceive the world, and his ministers are also transformed into ministers of righteousness. In other words, they are all actors, a bunch of phonies, whose intent is to deceive the masses of the world.

Oddly enough, Ozzy is famed for using Satanic imagery throughout his music and performances, yet claims he doesn't believe in Heaven or Hell...

“I don't believe there's a heaven upstairs and a hell downstairs. I think we've got both hell and heaven here on earth. It's all here for us.” (Source: Ozzy Osborne - interview, 'Ozzy Meets Marilyn Manson,' 1997)

Mr. Osbourne will find out just how wrong he is the moment he passes into eternity.

Ozzy admits that about 25 parents have sued him for the suicide deaths of their children, alleging his music as the cause (Source -interview, 'Ozzy Meets Marilyn Manson,' 1997). Mr. Osborne defends his music and so does the irresponsible U.S. Supreme Court on the basis of Free Speech. I believe in Free Speech, but I also believe that people should be held accountable for the consequences of their words.

In 2014, I wrote an article exposing “The Deadly Deception Of Designated Drivers.” In the article I quote and link to information by psychologists who show the power of suggestion. It has been proven that music, television, videos and advertisements that promote alcoholism (or suicide) DO increase the incidents of alcoholism, because the human mind is more likely to do something if encouraged to to do it. Ozzy Osbourne is guilty in God's eyes, because his pro-suicidal music influenced hundreds of weak-minded youth to kill themselves. I'll guarantee you that 10 times the amount of youth commit suicide, than those families who sued Ozzy.

I recently heard a Baptist pastor mention Smucker's Goober peanut butter and jelly. I immediately got a craving and went to my cupboard to get my Smucker's Goober, strawberry flavored, and I made a big sandwich. It was good! You see, that's the power of suggestion. A lot of teens grow up in horrible family conditions, or with no family at all, and some monster like Ozzy appeals to teens with his Satanic music, suggesting that they go commit suicide... AND SOME DO!!! God hates hands that shed innocent blood (Proverbs 6:16-19). Ozzy can blaspheme, curse and denounce Christianity, the Holy Bible and Jesus Christ all he wants, but “God shall bring every work into judgment, with every secret thing, whether it be good, or whether it be evil” (Ecclesiastes 12:14).

“I've always said that if someone is stupid enough to want to kill themselves over music, then that's what they deserve. That's one less stupid person in the world.” (Source: Marilyn Manson: interview, 'Ozzy Meets Marilyn Manson,' 1997) 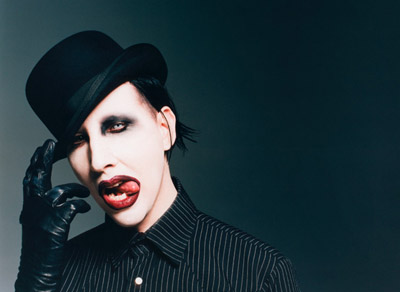 Isn't that awful? These wicked men sing about killing your parents, committing suicide, ripping apart Bible in concert, and committing all manner of evil, but then when you actually take their advice and do it, they call you “STUPID!” They got rich off you! Your stupid they say!

The Truth About Marilyn Manson

Mr. Warner eerily sounds like Ebenezer Scrooge in “A Christmas Carol,” when he proclaimed... “Then let the poor perish and decrease the surface population.” Ozzy Osborne and Marilyn Manson are icons to young and middle-aged rockers around the world, even the elderly these days, revered literally to the point of worship in many cases.

Brian Warner (Marilyn Manson's real name) claims that he attended a Christian school while growing up, which prohibited him from listening to such bands as Queen, Led Zeppelin and Black Sabbath. Warner actually attributes his Satanic music career to having been denied such music as a child. In short, he blames Christians. The truth is that Brian is looking for excuses to justify his rebellion and wickedness against God.

On judgment day in eternity, when Brian Warner stands before God, he will regret his foolishness and rebellion. Mr. Warner will be cast into the raging Lake of Fire for ever and ever without hope, mercy or relief. He could go to Heaven for free, but he doesn't want it. Marilyn Manson as of 2015 has a net worth of $25,000,000. He is wealthy, and rich people are proud, too proud to humble themselves to admit that they are a sinner and need a Savior, Jesus Christ. Brian cannot take one penny of his money with him into eternity. What a sad thing! 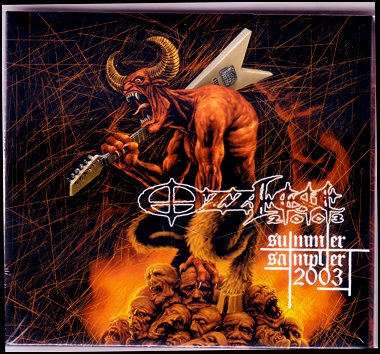 Ozzy Osborne and Marilyn Manson are NOT just men without Jesus Christ, they are also men who have deliberately rejected Jesus Christ. Many of their lyrics mock the Word of God and Jesus Christ. Ozzy is also famed as the former lead singer of the Satanic band, Black Sabbath. In one of the more popular songs of Black Sabbath, Iron Man, Ozzy Osborne personifies Satan as the "Iron Man," proclaiming that he "kills those he wants saved."

For Ozzy Osborne to deny any belief in heaven or hell and claim not to be a Satanist is simply absurd. Both of the men presented in this article are in desperate need of salvation, but more than likely they will both burn in hell-fire due to the stubborn rebellion and hardness of their hearts against the truth of God's Word.

God will NOT be mocked, a man will reap what he sows (Galatians 6:7). Both of these wicked men can still be forgiven and saved, but they MUST come to God in repentance. God will surely receive them if they'll only repent of their unrighteousness and come to the Saviour in faith. ONLY through Jesus Christ can anyone go to heaven.

How about you my friend... have your ever been born again? I plead with you not to be foolish like Ozzy Osborne and Marilyn Manson... they are hellbound. If you'd like to know for certain that you are going to heaven when you die, then please click on the link below.