There is no such thing as “reincarnation.” Reincarnation is a false teaching of Buddhism and the New Age movement. The Bible teaches only two possible eternal destinations: Heaven or Hell. The choice is ours alone to make. God never sends anyone to Hell except those who choose to go there by rejecting the gospel of Jesus Christ.

There is no second chance after death. There is no such thing as “Soul Sleep.” There is no break in conscience at death. The rich man in Luke 16:19-31 went straight to Hell, and Lazarus was immediately escorted by angels into Paradise. It is important to take heed to what Abraham told the rich men who went to Hell... Luke 16:31, “If they hear not Moses and the prophets, neither will they be persuaded, though one rose from the dead.” If you won't obey the Bible, then nothing will convince you of the truth.

A man once said to my that he would never accept the Bible as truth unless God personally handed it to Him. That man is a fool who will spend eternity burning in the torments of Hell if he dies in his sins. Are you willing to challenge God at His Word? Not me buddy! I am as narrow-minded as the Bible. Everyone lives by their own book; but wise men choose to live by the Bible.

In Acts 7:56, Stephen saw the heavens opened, and the Lord standing, as he was being martyred for preaching the gospel. Clearly Stephen was being received into Heaven.

The Jehovah Witnesses and Seventh Day Adventists are false religions, formed by occult members of Freemasonry to lead ignorant followers into the New World Order. All mainstream religions today have either been founded by Freemasons, or have been infiltrated by Freemasons, and are part of the New World Order's Luciferian religion of experiences and feelings rather than Biblical truth and righteousness.

In 2nd Corinthians 5:8, the Apostle Paul said that to be absent from the body is to be present with the Lord. Of course, this only applies to born-again believers. 2nd Thessalonians 1:8-9 plain warns that the unsaved will be punished in flaming fire forever and ever.

The word of God says that we will die ONE time and then we'll be JUDGED for our words (Matthew 12:36) and deeds (2nd Corinthians 5:10-11 for the saved; Revelation 20:11-15 for the unsaved). We will be conscious forever—whether in the joy of the Lord's presence in Heaven; or in the fire, torment and bitter regret of the Lake of Fire.

You are a sinner and you WILL die! All humanity has sinned (Romans 3:19-23). God did not create man to die. He created man to live forever that we might please the Lord (Revelation 4:11). But the first man, Adam, chose to disobey God; and as a result, Adam DIED. Sin and death passed upon all mankind (Romans 5:12). Adam is not alone in transgressing against God, for every descendant of Adam has also sinned. Mankind is inherently sinful.

The good news is that we don't have to die a Second Death. Revelation 21:8 mentions a “second death.” This is eternal damnation in the Lake of Fire. Please note that spiritual death is NOT the same as the Second Death. Every human being is born spiritually dead. This spiritual death is inherited from Adam. That's why we must all be “born again” to enter into the kingdom of God (John 3:5). Those who reject Jesus Christ as the Son of God, and die in their sins, will suffer a Second Death in Hell, fire and brimstone forever.

Ecclesiastes 7:20, “For there is not a just man upon earth, that doeth good, and sinneth not.” We've all broken God's laws and those who die without a pardon will be mercilessly cast into “the lake which burneth with fire and brimstone: which is the second death” (Revelation 21:8). The irony is that eternal life is a free gift, completely paid for by Jesus Christ. No one needs to go to Hell. God the Father has promised to forgive the vilest sinner who comes for forgiveness through Jesus Christ (John 14:6; Isaiah 1:18). All you need to do is acknowledge your guilt of sin for breaking God's Laws, and believe upon the name of Jesus Christ to be forgiven of your sins (John 20:31; Acts 10:43). Salvation is as simple as getting on the ark.

We All Have an

Let's Go Soul Winning While We Still Can!

In Romans 10:15, God calls the feet of the soul-winner, “BEAUTIFUL.” Why the feet? Why not the tongue that preaches the truth? Do you know why? It is simple. All the knowledge of the truth, and the most eloquent speaker, means absolutely nothing if you don't use your feet to bring the good news of Christ crucified, buried and risen to lost sinners. We must compel them, going out into the highways and hedges with the gospel as the Bible teaches (Luke 14:23).

Do you run your life the way you see fit? If so you are rebellious, lawless, and disobedient. Proverb 3:5-7 commands us to trust in the Lord, lean not upon our own understanding, acknowledge Him in all our ways, fear God, and depart from evil.

God loves the world so much that He gave His only begotten Son for our sins (John 3:16). Jesus Christ became a sacrifice to die in our place. He died FOR OUR SINS. He did not die for Himself. Jesus did not have any sins (2nd Corinthians 5:21; 1st Peter 2:22; Hebrews 4:15). Jesus Christ was already one with the Father BEFORE He ever came to earth (Isaiah 9:6). Jesus came to save lost sinners. Luke 19:10, “For the Son of man is come to seek and to save that which was lost.”

No Christian will be able to win any more souls to the Lord in Heaven. It will be too late to turn many to righteousness as Daniel 12:3 says. We have a small window of opportunity. God has given us a wonderful responsibility to preach the gospel to as many lost sinners as we can. If not us, who? If not now, when? If not here, where?

What are you going do? 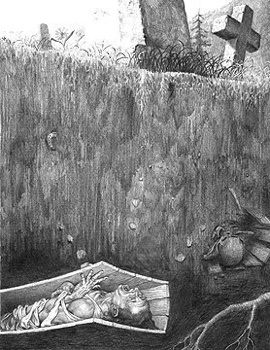 Death is coming! Over 225,000 people die everyday on average. These people don't just wake up and say, “Oh, today is a good day to die.” This 18-year old girl never thought this would be the last day of her life. People get up, take a shower, and start on their merry way just as if today will be like every other day... but it's not. It is the day that their soul will be required of them.

You don't have to remain on the broad way that leadeth unto destruction. Jesus came so that you could be reconciled unto a holy, righteous, loving, merciful and kind God. There is only one God. The God of the Bible is God. There is NO other God. You must do business with Him, and He hath appointed ONE WAY for you to know Him, and that is through Jesus Christ. Consider your soul. Turn to God by faith in Christ. Do not despise the precious gift of Jesus Christ. AWAKE to Christ's righteousness, i.e., the imputed righteousness of Jesus Christ by faith. Only Jesus can forgive sins, for it was He Who died for OUR sins (1st Corinthians 15:3).

Man's breath is in his nostrils. People in the best of health are only a breath away from death. Death is only the beginning of eternal consciousness, either in Heaven or in the Lake of Fire. My friend, please make it right with God today. If you are unsaved, you need to be afraid... VERY AFRAID!

How to Be Saved